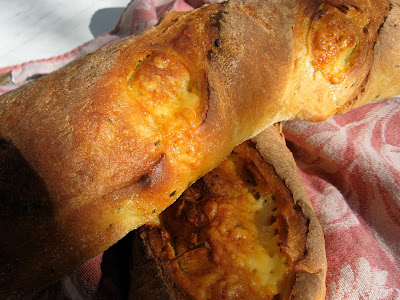 When I first looked through The Bread Bakers Apprentice, this was one of the breads that I wanted to make. At the end of the book, Peter Reinhart writes about some wonderful bread bakers, Tim and Crystal Decker. The Deckers opened a bakery called Bennett Valley Bread and Pastry. This is one of Bennett Valley Bread and Pastry's most popular breads.

8oz of potatoes were coarsely chopped and boiled in 3 cups of water until soft. The potato water and the potatoes were cooled. 10.5 oz of barm, some flour, yeast, the potatoes and 1/2 of potato water were blended together, then allowed to sit for 30 mins. More flour and salt were added. The dough was kneaded for 6 minutes, 1/4 of chives were added. Kneading continued for a few more minutes. The dough fermented for 90 minutes. It was formed into two rectangles, which were covered with cheddar cheese slices, rolled up and formed into logs with tapered ends. these were allowed to proof for 60 mins.

Some where around this point, I left and turned over the kitchen to my main stake holder. I left the book open on the counter, put the oven stone in the oven and took off. I thought I was in trouble when he called and asked if we were making the Roasted Onion and Asiago Miche, but after a moment of confusion, there was quick recovery. He did a superb job slicing to the cheese. The loaves were beautifully browned, he called me to tell me that they were more browned that other loaves that I have baked, but closely resembled the loaves in the book.

By the time I returned, they had cooled. They are a deeper brown than a lot of the loaves that I have baked. Maybe I should let the main stake holder handle all the baking? Good news for us, at Bennett Valley, they appear to have a shorter cooling time. As I had heard through the rumor mill, these breads are delicious. A great one day bread.

This is such a beautiful, delicious loaf of bread, I am sending it to Yeastspotting.
Posted by Rosemary & Garlic at 4:41 AM