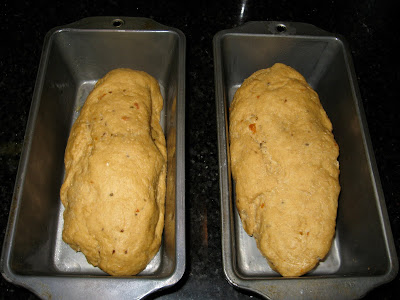 Dear BBA friends, I have a confession, I have killed the bread. I don't know how. Things were going so well. I had some organic oranges and made dried orange peels some time ago. Last night, I crushed them in my mortar and pestle and made the intriguing sponge with the water, molasses and dried orange peel, aniseed, fennel seed and cardamon. I let it cool and added it to some very happy barm and white rye flour. I had a bubbly perky sponge.

This morning, I measured out some bread flour, the yeast (I do remember doing this) the salt, brown sugar and vegetable oil. And then, because I was out of my high gluten flour, I added some vital wheat gluten. Some where I have done something wrong. It didn't windowpane. Do you knead longer? Or avoid the death by gumminess. I avoid gumminess.

It may be the weather. It is wet and cold here. But have moved the loafs into the slightly warmed oven to rise. They are not rising.

It may that they sense my attitude. I am in a bad mood. I have an ill child and I cannot figure out what is wrong with her. I have been a school nurse for a long time. Generally, I have a clue. I am off today, to bake the bread that will not rise but smelled so good and go to the doctor. The stupid bread.

People have had great success. Oggi gave it all fives, and hers look so beautiful. Gaaarp thought it was amazing. Sally's looks delightful. She said that hers didn't rise much, but mine is in two loaf pans, a little effort on its part would be appreciated at this point.

I don't like rye flour. It is pasty. Not pleasant. Perhaps it senses it. It feels kind of alive...

Have I mentioned that my bread is not rising. How long do you think is too long a rise? 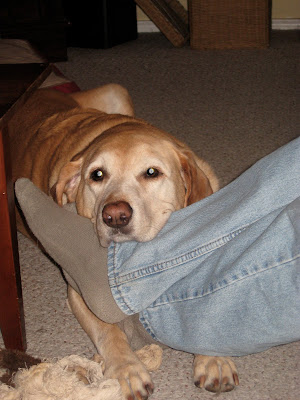 Scout doesn't understand it all. At the end of a long day, she is just looking for a place to rest her head.

Two hours later, there was some signs of life and in the oven, spring, just like Oggi had predicted. But no where near what I expected. Still they are delicious.
Posted by Rosemary & Garlic at 8:23 AM