Well, we moved across the country and bought an old house.  One of the first thing that we did was paint it. 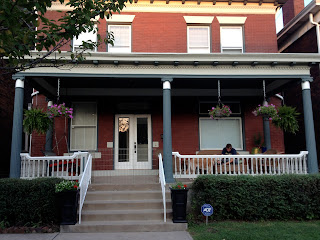 It needs work.  But it has a great porch.  I think that I bought the house for the porch.

The woman who owned it had made an apartment on each floor.  However, she didn't have a permit for multiple occupancy so she ripped out the kitchens on the first and third floor.  The kitchen on the second floor is adequate for an apartment.  No counterspace, no dishwasher, no exhaust fan.  Barely adequate.

We are in the process of putting a new kitchen in downstairs.  The first bid that we received looked like a lot of college tuition so we are getting some other bids.  It is a long process, especially since we are new to the area. 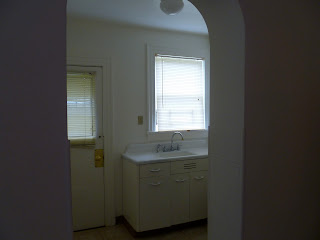 We've had a few changes.  My daughter left for college.  She left a large void in our lives.  We all had a pretty good rhythm and are trying to figure out the new steps.

My sons, who happen to live in town, decided that the empty apartment in the attic looked a lot better than the decrepit apartment that they were spending $900/month on.  So they asked if they could move in for a while.  Graduate school takes a lot of time, it is nice to have a stocked refrigerator and washer and dryer in the basement.  Number one son (oh, he how he likes that title)  brought with him a ten month old puppy. 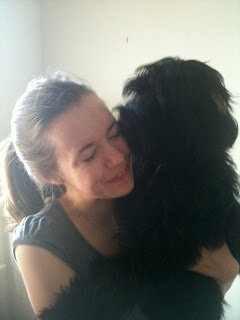 Our ten year old yellow lab isn't sure what to make of this.  Murphy likes to be very close to Scout, very close. 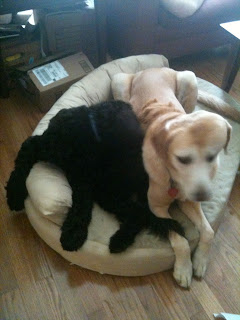 We decided that everyone (OK, I suggested it and they were all agreeable) could cook a meal each night.  Which has spurred me to post.  My son just made the best crock pot meal.  No real pictures because my camera is in DC, but make this. 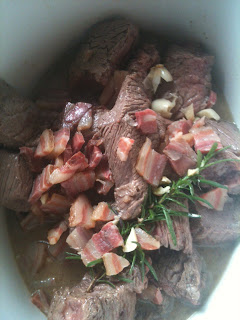 It is from Michele Scicolone's The Italian Slow Cooker .  Make this and then buy this book, everything that we have made from this book has been delicious.

Braised beef with anchovies and rosemary.   OK, by now we all know that anchovies add a depth of flavor and are essential to the cupboard...

Heat oil.   Brown beef  and panetta in batches, don't crowd the pan.  Cook until nicely browned.  Transfer to slow cooker.  Season with salt and pepper, go easy on salt.  There is enough in the pancetta and the anchovy.

Spool off excess fat from pan, add the garlic and anchovies, cook for 2 mins and the wine bring to simmer and scrape bottom of pan.  Pour the liquid into slow cooker, add the rosemary.  Cover and cook on low for 6 hours until very tender (this only took me 4 hours).  Discard rosemary.  We served it with oven roasted butternut squash and baby yukon poatoes.

This is a keeper.