Do you have too many zucchinis?  This is a delicious recipe.  A great way to use up some of those squash in a unique breakfast.  Think healthier hashbrowns, with a zing.

Food network posted the recipe from their magazine on their web page along with a nicer picture of gooey eggs, if you liked gooey eggs.

I used half the squash mixture with four eggs.  Toms were gooey, mine stayed in the oven for a little longer.  Great way to start the day.

Grate the squash into a colander using the large holes of a box grater (or use a food processor fitted with the shredding attachment). Toss with 1 tablespoon salt, then let drain in the sink, 30 to 40 minutes. Squeeze the squash to remove as much liquid as possible.
Preheat the oven to 375 degrees F. Heat the olive oil in a large ovenproof skillet over medium-high heat. Set aside 3 tablespoons scallion greens. Add the remaining scallions (white and green parts), the jalapeno, and salt to taste and cook until the scallions are soft, about 3 minutes. Add the shredded squash and cook, stirring occasionally, until tender, about 7 minutes. Stir in the parsley, nutmeg, and pepper to taste. Cook until the mixture is slightly dry, about 1 more minute. Remove from the heat and let cool, 5 minutes.
Spread the squash evenly in the skillet. Make six 2 1/2-inch-wide indentations in the mixture with the back of a spoon; put 1/2 teaspoon butter in each one. One at a time, crack each egg into a small bowl and pour into an indentation. Season with salt and pepper, and sprinkle with the cheese.
Transfer the skillet to the oven and bake until the egg whites are set and the yolks are cooked to desired doneness, 10 to 12 minutes. Scatter the reserved scallion greens on top.
Posted by Rosemary & Garlic at 3:43 AM No comments: 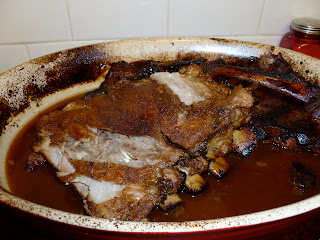 Things fell apart in June.  My mother went into the hospital in the end of May with hip problems.  And then on to rehab where she said that she had no desire to exercise, none.  Not at all.  And she fired everyone...She wanted me to find her "some place Catholic to die."  Fascinating thought, but as far as I can tell, she isn't dying any time soon.  But, she has moved in with the grey habited Polish nuns, going to Mass every day and seems to be a little higher on the happiness continuum.  Still enjoying a good piece of cake. 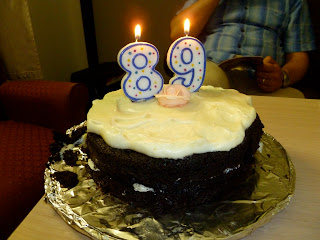 Scout and I are tackling my summer to do list.  She is incredibly supportive.  I had a list of things a mile long that I intended on doing this summer while I was off from school.  I am now playing catch up.  How many can I do in the few weeks remaining before school starts? 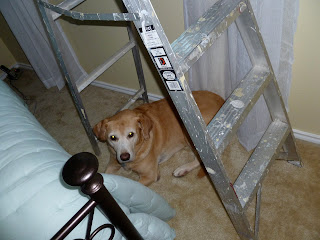 My husband walks around and talks about bread longingly.  You used to bake bread, I hear him muttering.  It has been a sad month or two.  My starter is a little grey.  I'm sure it will come around.

One day in June, I decided to make the majority of the French Fridays with Dorie's recipes for June.  We started with the tomato strawberry salad.  I knew that I had some delightful mozzarella in the fridge, my husband knew that he had eaten it.  Oh well.  This still was a great salad.  Ripe tomatoes, strawberries, basil and mozzarella combined with a smidge of olive oil and a bit of balsamic vinegar. 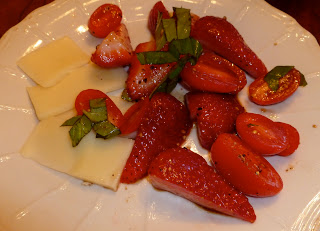 We moved on to the ribs with jam and Coke.  So, here in Texas, Tom cooks ribs.  In the backyard.  Maybe in a smoker, maybe the edge of a mountain of charcoal, maybe on a gas grill.  Not in the oven.  Not with jam.  I tried to hide the ingredients from his prying eyes.  But he was onto me the night before when I rubbed the ribs with the spice rub.  Five spice powder, ginger and salt and pepper are rubbed onto the spareribs.  Then they are covered with a mixture of apricot jam, orange juice and the juice of a lemon.  They are the refrigerated for several hours.

Into the oven in a roasting pan with a few tablespoons of water.  They are cooked, basted every so often for an hour and a half.  Then the Coke is poured around the ribs and they are basted every five mins for another half hour.

These were delicious.  An oriental flavor, fall off the bone tender.  #2 son would love these.

For dessert we had roasted rhubarb over ice cream.  Rhubarb is trimmed and cut into piece, tossed with sugar and zest of an orange.  Covered with foil and roasted in a 400 degree oven for 20 mins.  When it had cooled, we put it on ice cream.

I grew up eating rhubarb.  I love it.  I had never roasted it.  It is my new favorite way to prepare it.  Not that I see it much here in Texas. 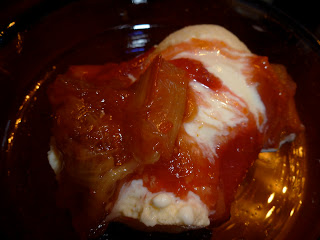 In the beginning of July, I went to DC for a school nurse conference.  I stayed an extra day and we went to the Newseum.  A new museum in DC that is not free, sad to say.  But it was fascinating.  Below is a picture of world.  The green indicates countries with freedom of the press.  Something that we tend to take for granted here in the US. 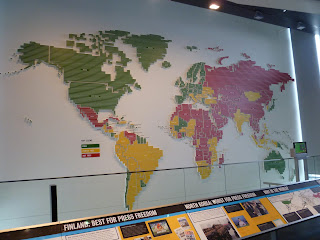