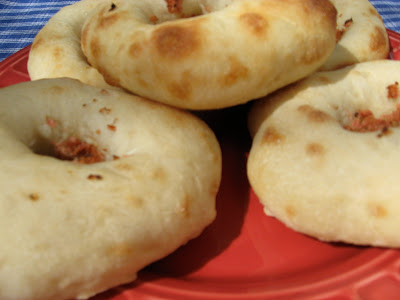 I ordered a new cookbook. I didn't need one, I wanted one. I am saddened that the end of the BBA challenge is around the corner and am wondering what to do next. I have found that I really enjoy baking bread on the weekends. I find it to be a calming, rhythmic, productive way to make the bread for my family.

I asked Tanna of My Kitchen in Half Cups about some of the books on her bookshelf, not of course one of the many that I already own. She recommended Maggie Glezer's Artisan Baking. The New York Times calls it a landmark book. I'm trying to figure that one out..

I planned on skipping the wheat bread for now, only for this weekend. It would be the first one that I skipped. All the way to W and now I am skipping. I think that I have a good reason. My main stakeholder has been away on retreat with 100 teenagers. We all know he is bread lover. I thought that I would make sure that I had some waiting for him.

I could envision the reunion, hi honey, while you were away, I baked some whole wheat bread. Unfortunately, not a single person who has baked it thus far has enjoyed it. Hope you break the trend.

So, I was going to skip it and head for the cheddar chive bread which has received rave reviews. Unfortunately, my starter is a little slow, I needed a back up plan.

There was a recipe in the new cookbook that had caught my husband's eye, Kossar's Bialys. My husband grew up in New Jersey in a predominantly Jewish neighborhood. There is a real bagel shop around the corner from his house and my inlaws will pick some up before they fly out to Texas. My husband's formative years were spent eating whitefish salad, lox and whatever else he could find.

A bialy is the short name for bialystoker kuchen. Bialystock is the second largest city in Poland. These delicious Jewish breads originated there and came to New York around the turn of the century.

Glezer's recipe recommends using a food processor to make the dough. You mix high-gluten flour, yeast, salt and water in the food processor. It becomes startlingly hot, you take it out, knead by hand to cool it down, and repeat a couple of time. I think it was a little stressful for my food processor. While the dough was fermenting, I went onto the web to see if anyone had tried the recipe and had any tips. Bread cetera proposes a double flour addition technique which I think I will try next time. This method allows you to use your stand mixer.

I made the onions, cooking them in the oven, they turned an odd pink tinged. Next time I will carmelize them on the stove top.

After about 2 hours, the dough was divided and formed into 12 pieces which were formed into balls. After 2.5 more hours, they were formed into pizza shapes with a narrow membrane of dough in the center. a smear of onions went into the center. They were then baked in a 475 degree oven for 6 mins. They are delicious.
Posted by Rosemary & Garlic at 11:24 AM