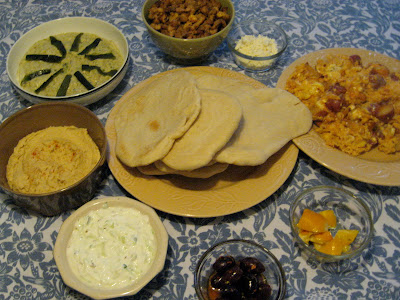 This month's daring cooks challenge was proposed by Michelle from Veggie Num Nums. The challenge was to prepare a mezze table, a collection of small dishes from the Mediterranean. What a fun challenge. I have a number of Mediterranean cookbooks and was looking forward to trying out some recipes. Michelle had one stipulation, we must use her hummus and pita recipe.

Her hummus recipe was delicious. The recipe calls for a little more lemon juice than I usually add, but we all enjoyed it. Apparently, pitas should puff when you cook them, like blowfish. Some of mine puffed, some didn't. I wasn't sure if the baking stone lost heat between patches or I needed to roll them out thinner.

Michelle had a couple of ideas for some dishes for the mezze table. She had a shot of a jar of preserved lemons. Preserved lemons are a condiment used commonly in Morrocan cooking. Most recipes take several weeks. I found a quick preserved lemon recipe on Cooking Light's web site.

I washed and quartered two meyers lemons and boiled them in 1 cup of water with two tablespoons of Kosher salt for 30 mins.

The lemons were a big hit. Unusual, tart and delicious.

1 medium cucumber, peeled and most of the seeds removed
1 teaspoon cumin seeds (.1 ounce/3 grams) OR use a small pinch of dried cumin—to taste
2 cups plain whole milk or Greek yogurt (17 ounces/473ml)
1 garlic clove, peeled and minced
fresh coriander or mint, chopped, a couple pinches or more to taste
cayenne pepper or paprika, just a pinch to use as a garnish (optional)

Directions:
1. Peel cucumber, de-seed, and dice. Blot off moisture with paper towels.
2. Toast cumin seeds for a few seconds in a small, heavy frying pan over high heat.
3. In a bowl, stir yogurt until it is smooth.
4. Mix it with the cumin, garlic and coriander or mint leaves (I used some grated radish instead).
5. Stir in the cucumber and sprinkle with cayenne or paprika, and chill before serving.


I decided to try one of my newest cookbooks, The New Mediterranean Diet Cookbook but Nancy Harmon Jenkins. All of the recipes that we tried we delicious. After pouring through the cookbook, I came up with a menu for my mezze table.

(harissa is a hot sauce made of a variety of dried chilies, coriander, cumin, caraway, cloves and olive oil. Available in some Middle Eastern stores, I used Sriracha hot sauce)

In a large skillet, med heat, sauté the potatoes in 2 T o.o, until softened and browning, about 15 mins.

While they are cooking, pound the salt and caraway to a powder in a mortar, then add the garlic and form a paste. Dilute the tom puree with the warm water, stir in the hot sauce, combine with the garlic paste. When the potatoes are done, at this to the pan, stir for 5 – 10 mins, until liquid is reduced to thick sauce. Taste and adjust seasoning. Beat the eggs with a fork, add to pan, lift to let eggs run under pan. When eggs are at desired consistency, remove from heat and serve.

Perhaps our favorite was the Melitzanasalata. We poked an eggplant with a fork a dozen times and then grilled it for about 20 mins. We blackened 2 poblanos. When they had cooled, we combined their flesh with 1/2 cup plain yogurt, 2 T olive oil, juice of half a lemon, clove of crushed garlic and salt. I used an immersion blender.

This was such a fun challenge.
Posted by Rosemary & Garlic at 4:59 AM