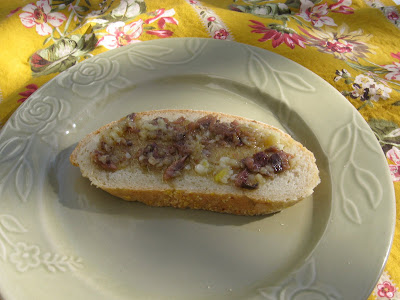 As we near the end of the challenge, perhaps we have reached one of the more challenging breads for our palates. The Tuscan bread has no salt. It is typically served with some more flavored foods. The New York Times just had an article on Tasty Tuscan Bread. Unfortunately, many of the BBA challenge members who have gone before me have not enjoyed the bread. None of them called it tasty. Oggi really tried a variety of toppings but she isn't heading out to buy any Tuscan bread any time soon. Sally made a beautiful loaf that I don't think that she will be making again. Phyl had a pretty similar conclusion.

So the New York Times likes it. Personally, I'll eat anything that you want to feed me in Tuscany. The recipe that they provide is not similar to Reinhart's. Peter's recipe starts with the formation of a flour paste, boiling water is dumped on flour which is allowed to sit out overnight. The next day, flour yeast, olive oil, the paste and enough water to form a soft supple ball are combined. The NYTimes recipe uses a sponge, no olive oil. But we are talking flour, water and yeast here. After the bread has doubled, I formed it into a boule. I had cut the recipe in half after I had read the reviews and was trying to figure how to enjoy the finished product.

The article suggests making the dried bread into a salad with tomatoes, onions and basil, panzenella. Sounded like a possible future if we didn't like the bread. But first I thought the I would make some Bagna Caoda/Cauda. It is a warm dip, from the Piedmont area of Italy. It is made by combinining olive oil, butter, garlic and anchioves. We normally dip raw vegetables in it. It is one of the saltier flavors that I know of. Slathered on the bread, it was quite tasty. The bread by itself is unusual. Not my favorite flavor, but my main stake holder finds it quite tasty. Apparently as long as there is no fruit in the bread, he will eat it.
Posted by Rosemary & Garlic at 7:06 AM