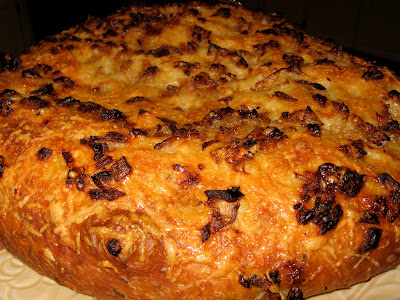 I wish that you could smell my kitchen. This bread has filled the house with the aroma of bread, cheese and onions. It is amazing.

It was a three day bread. A bonus recipe in the end of the Bread Bakers Apprentice. Another recipe from Bennett Valley Bread and Pastry's.

It started with a sponge of water, flour and starter. Then onions were chopped, sprinkled with olive oil and roasted with some salt and pepper.

I made the whole seven pounds of dough. The dough had the started and some instant yeast as well as flour, water, salt, olive oi, 16 ounces of asiago cheese, chives and scallions. Half of the cheese was incorporated into the dough, half was saved for the top. After the ingredients were mixed, the dough was formed into two large boules which were put in the refrigerator for up to three days.

While baking, in the hearth like oven, the aroma was amazing. We all enjoyed the bread and I took a loaf into work. It was gone pretty quickly. I was worried, it is a full flavored bread, with the onions and scallions and chives. But everyone enjoyed it.

I am conflicted now that I have reached the end of the book. I am proud and excited that I have completed all of the recipes and sad to see the end of the book. I have never cooked every recipe in a book before. I think that it is a fascinating way to approach a cookbook. The Bread Baker's Apprentice by Peter Reinhart is subtitled Mastering the Art of Extraordinary Bread. I certainly have made some extraordinary breads. I have become familiar with the twelve stages of bread baking, cooling remains my least favorite stage. I wouldn't consider myself a master at bread baking, but I am on my way. Some of the breads I will make again and again, and some I made just for the experience. I can easily say that my reasons for preferring some breads are based on childhood memories, personal palate and past experiences.


Plans? I think I'll head over to Mellow Bakers. A new challenge is in the works. Why not?
Posted by Rosemary & Garlic at 7:34 AM