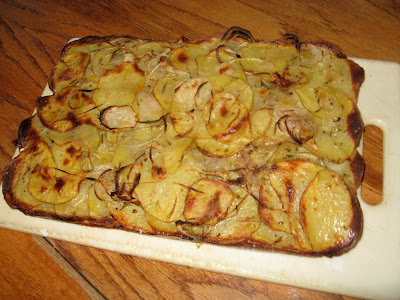 I am enjoying Maggie Glezer's Artisan Baking. It is hard for me to decide which recipe to try next. I chose this recipe because the guy in the book looks so pleased to be carrying a potato pizza. And why shouldn't he? Potatoes, pizza, what is not to like?

It is a very wet dough that is made by mixing bread flour, all purpose flour, instant yeast and 109% water with a pinch of salt and sugar. 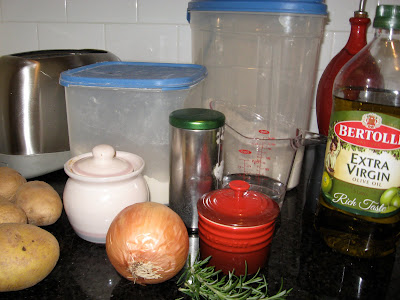 You are supposed to mix it for 20 minutes to see the miracle of bread making. It took a little less for a nice dough to form.


After fermenting for four hours, it is put in the bottom of a 13 x 9 pan that has been coated with olive oil. After it is given a chance to rise, it is covered with a mixture of thinly sliced yukon gold potatoes, onions, salt, pepper, rosemary and olive oil. The rosemary plants in my backyard are covered with new growth.

It smells incredible while baking.

We all enjoyed the pizza although we aren't really sure that it is a pizza. We are willing to give it another try to discern it's true nature. Some people in the house think that a pizza has to have some sauce/cheese. It has been suggested that this is more like a tart by my bread eating family. I do not know, but I know why the guy in the book is smiling.

I'm sending this to YeastSpotting!
Posted by Rosemary & Garlic at 4:44 PM