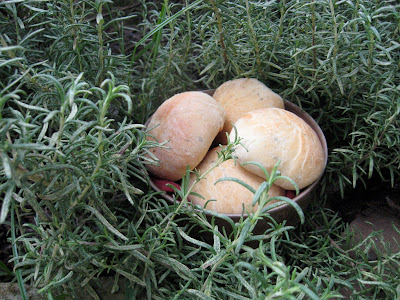 I had been looking forward to making this bread for some time. I like rosemary and roasted garlic and have a favorite roll recipe that uses mashed potatoes. I had high hopes for it.

Yesterday, I made the biga and left it in the refrigerator over night. I woke up early and started roasting garlic. The house was soon filled with a delicious aroma. I cooked some potatoes and assembled the mis en place. The biga was cut into smaller pieces and allowed to come to room temperature. Then it was combined with flour, salt, black pepper, yeast, mashed potatoes, rosemary and water. I used my mixer to form a soft and supple dough. The dough fermented until doubled in size and then I divided it into one large loaf and eight small rolls. These were again allowed to double in size and then they were baked.

I wish you could have smelled them baking. What an aroma. When the bread came out of the oven, Scout came around the corner. Scout has an affinity for bread products. We don't give them to her, but as an intelligent labrador she is always looking for opportunity. She has been known to steal any bread products left unattended. I believe that she thinks that some day I will come to my senses and recognize her as an equal with full rights to anything that comes out of the oven. Today would not be that day.

I had reached the most challenging part of Mr. Reinhart's recipes, the mandatory cooling period. We are getting better at waiting. However, at this moment Emily woke up, drawn by the aroma, she was staring at the rolls. I can't stand the thought of a hungry child, so I gave her one. She made the mistake of deliberately walking by her father who was unable to understand why she could have a roll and he couldn't. Somehow, we started down that slippery slope and there almost weren't any rolls left to photograph. They were delicious. I am looking forward to making the loaf into sandwiches. My main stakeholder says that this may indeed be his favorite, but I have heard that before.

My backyard has turned into a jungle. The rains after the drought have all the plants confused. They are having an unusual growing spirt considering it is fall. My rosemary has added inches, my bay tree will soon take over the house, the basil is going wild, even the mandevilla is blooming. I had thought that I would photograph the rolls in the rosemary so you could see the lush growth.

Scout felt for sure this was her time. Who puts food down in the backyard and doesn't give it to her? She is sulking in the corner right now. 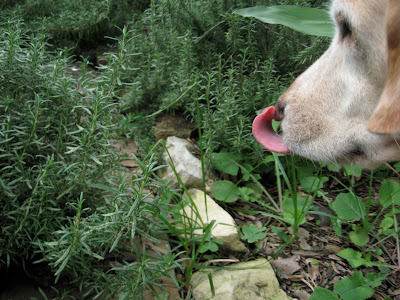