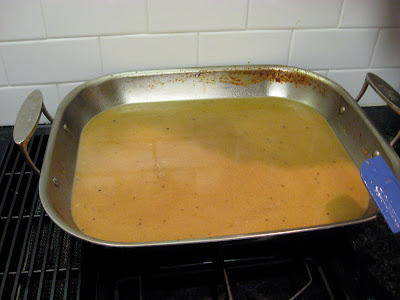 Matt, or as he prefers to be addressed, number one son, is allergic to turkey. I am sad to confess that for years I have been making homemade gravy for the rest of family and giving him chicken gravy from a jar. Tom cooks Matt's alternate protein on the grill or in the smoker. There aren't any drippings and it is just easier to buy the jar.

The other night, Matt and some college friends had a Thanksgiving feast at their apartment. Matt made the gravy. When he thought he had it close to where he wanted it, because of his allergy he had to call his friend Garrett over to try it. I've fed some of Matt's friends, they will eat anything. They are college rowers and are as far as can tell, perpetually hungry. I'm not sure how sophisticated Garrett's palate is, I do know that he would be a willing taste tester.

Any way I felt sorry for Matt when I heard that he was unable to eat his own gravy. I decided to make him some for his beer can chickens. First I bought a roasting chicken and put the giblets, the edible offal of a fowl, with some onion, celery, bay leaf and water into a pan and simmered it for an hour. 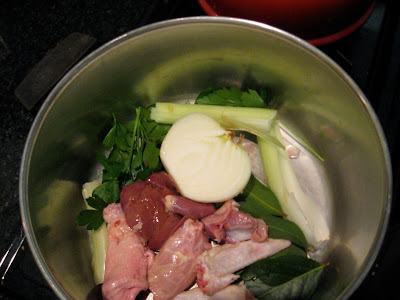 The bay plant in my backyard is making its way towards the second story. It typically grows to about five feet, but can grow to sixty. I guess that I have the sixty foot conditions. It does like a hard pruning in the autumn. 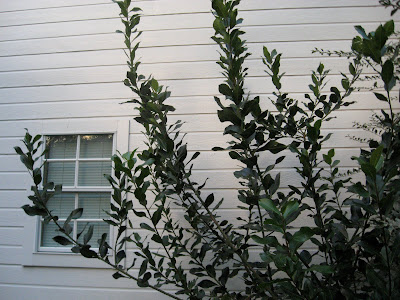 I decided to roast the chicken for our dinner, I need its drippings for Matt's gravy. Cooks Illustrated recommended 15 mins on one side, 15 mins on the other and then breast up for a succulent bird. I'm always willing to try a new way to roast a chicken. 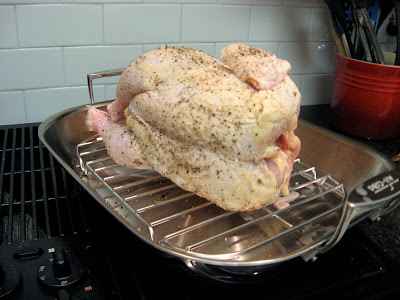 There is one problem with my plan, at the end of the evening, I will have a roast chicken and fresh gravy. How will I convince Tom and Emily that they will enjoy the gravy in the jar?

Once the chicken was roasted, I got rid of the fat. I added a half a cup of water to the dripping then some butter and flour, simmered to heat off the flour flavor and then added the broth. I let it cook to thicken and now have a delicious container of chicken gravy waiting for Matt and a roast chicken for dinner. 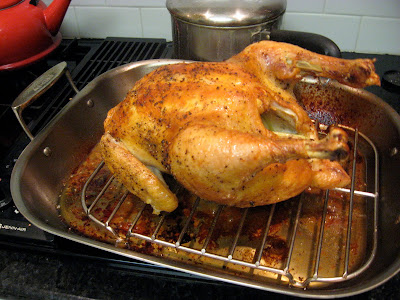