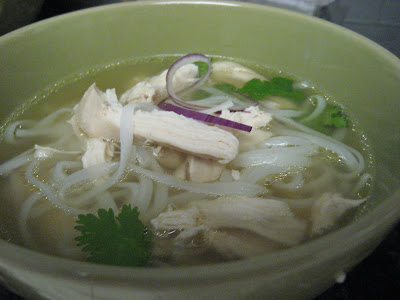 October's Daring Cook's challenge was suggested by Jaden of Steamy Kitchen. Cooks could chose between a chicken or beef pho. In her cookbook, she has a recipe for quick Vietnamese Pho that uses store bought chicken stock, but I decided to make the stock from scratch. She provided a link to her Pho Ga for the daring cooks who wanted to try their hand at making stock. 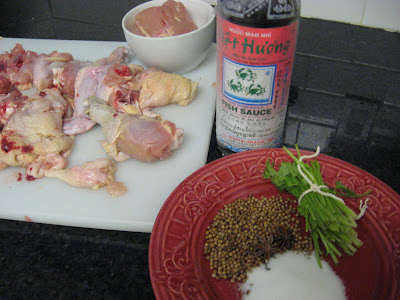 Once the chicken was parboiled, the roasted onion, ginger and coriander, cloves, anise, fish sauce, sugar and cilantro were added to the broth. The broth was simmered for 2.5 hours and skimmed of impurities every 15 minutes. The chicken breasts were removed after 15 minutes and served with the finished product.

The broth was brought to the table with rice noodles, bean sprouts, chicken broth, shredded red onion, cilantro, and lime. It was enjoyed by all.

Jaden also posted a dessert challenge; wonton wrappers any shape, any filling. We experimented with a variety of fillings and decided the nutella, banana combination was our favorite. We did not rise to the challenge of unusual shapes or fillings, its a challenge alone for us to make dessert! 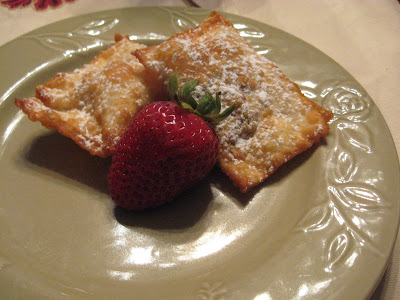