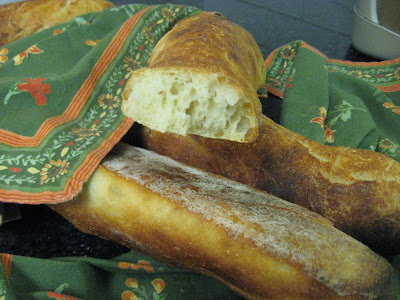 There are 43 recipes in the Bread Baker's Apprentice by Peter Reinhart. Why am I baking my way through this book? Late at night, when I can't sleep, I would look through food blogs. I have several favorites and some of them blogged that they had signed up for the challenge to bake their way through the book. Way ahead of me technologically, they were alerted by twitter and formed the original 200 blogroll. Nicole of Pinch My Salt posted the challenge, I found it appealing. And if I was going to bake my way through the book, I was going to document my trip. Someone posted a list of suggested dates, and you know that I am drawn to a list like a moth to a flame. So here I am.

With the majority of the egg enriched breads behind us, I have been looking forward to this part of the book. The write ups of the breads draw me in and make me want me to try the recipe. Except for the Panettone, who wants to eat a bread filled with golden raisins and candied fruits?

So Peter Reinhart writes that the cold mixing and fermentation cycles evokes a fullness of flavor from the wheat. This new technique opens a new frontier in bread baking. He says that 'this is an exciting place to find oneself, like standing at the end of the world, facing the words, as so often showed up on ancient maps, "Unknown Kingdoms Be Here"' He lives in an interesting world.

Like the majority of his breads, this bread takes two days to make. On Friday, I came home from work, threw my clothes in the washer, took a shower and then started baking. Germ phobic or a sensible school nurse in flu season...
Ice cold water, flour, salt and yeast are combined and mixed in the bowl. It is a wet dough, which ferments in the refrigerator over night. Then I moved on to make the mocha fudge cake from The Frog/Commissary Cookbook. It has to chill overnight or up to one week. I'll have to write that up later.

Saturday was a crazy day. I had read that the dough may take more like 4 hours to double once you took it out of the refrigerator, so I timed the doubling around errands. When it had doubled, I prepared my oven for hearth baking, which we all know seems like an invitation for disaster. To prepare the oven for hearth baking first I call the alarm company and turn off the connection to the fire department. My fire alarm is a little sensitive and once it goes off, there are firemen in the front yard. Next you put the pan in the oven for the steam. Then Peter invited us to heat our oven to 550, if they go that high. Do you ever look at your speedometer and wonder if your car goes as fast as the numbers on the dial. There is a 550 on my oven...

I dumped the bread on the counter and divided it into four with a bread scraper. Paul, at the Yumarama Artisan Bread blog, referred to the dough as worms and it stuck in my head. They had little shape. The pieces barely had form, transferring them from the sheetpan to the baking stone by way of the parchment in the 550 degree oven was challenging. The loaves stretched and their tales baked on the racks.

I poured the water in the steam pan, sprayed the walls and turned the temp down. after 8 mins I rotated the breads and set the timer for 10 mins. The breads were almost over browned. 207 degrees internally, but next time I will only preheat to 500. And just out of curiosity, at what temperature to you think parchment paper catches on fire?

These breads only have a 20 minute cooling time. You would think that we could wait that long, but we couldn't. We had to break a piece off, they were delicious. Filled with holes, nice crust. We got home late Saturday, had some bread, cheese and wine waiting for us.

Throughout the BBA blogroll, this bread has met with mixed reviews. Here are some links to check out.

The Yumarama Bread Blog
I Can Do That!
Posted by Rosemary & Garlic at 5:13 AM