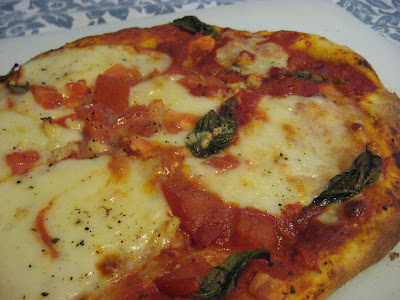 So, I went on a retreat last weekend. A peaceful, calm experience, until one of my friends broke my reflection and asked if I was going to fall behind with my bread baking! But I had a plan. The Panettone looks like it needs a little attention, in my mind it is an uptight bread, despite the addition of a large amount of alcohol. It needs coddling. But pizza dough generally is quite forgiving.

Yesterday I had a few minutes in the morning. I was dressed for work but thought that I could get the pizza dough in the refrigerator. I cannot bake without covering myself or my kitchen with a certain amount of flour.I put on my beautiful apron. One of my friends brought it back from Holland. It reminds me of the traditional clothing that her grandmothers wore. The bodice of their clothing is called a kraplap. This apron is made from material that would be used in the kraplap. Not that I long for traditional clothing, but I love the idea of grandma's teaching their daughters or sons recipes which get passed down from generation to generation. 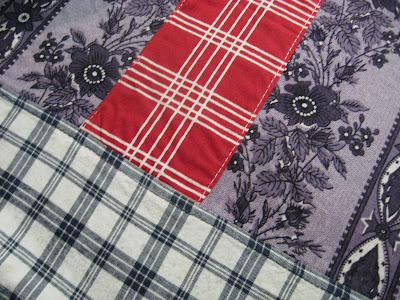 Protected from the flour, I made the dough. It was quite quick and easy. High-gluten flour, salt, yeast, olive oil and ice cold water. The dough was definitely springy, elastic and sticky. I had to resist the urge to add more flour. I divided it into six pieces and put them in the refrigerator. 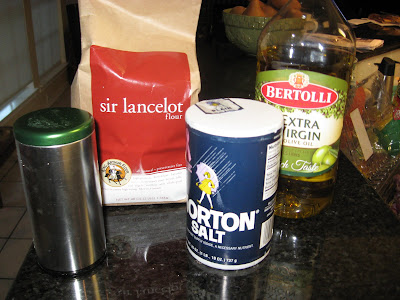 Last night, when I told the main stakeholder that there was pizza dough in the refrigerator, getting ready for tomorrow night's dinner, he could barely hide his delight. He was quite insistent that we make the classic pizza, the pizza margarita, sauce, tomatoes, garlic, mozzarella and basil. But with six pieces of dough, why limit ourselves to one flavor? 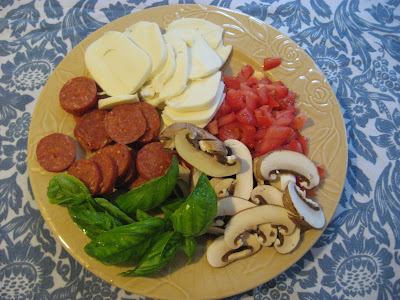 An hour before dinner, I put the pizza stone in the oven and cranked it up. I am wondering how many home cooks will be able to hit the 800 degrees that Peter suggests...I called the alarm company to disconnect the fire alarm from the fire department and we set up our assembly. The dough was easy to shape, but transferring from the back of a cookie sheet to the stone was challenging. I found myself wishing for yet another kitchen tool, the peel.

It was a very soft dough, much like the ciabatta. I never got a pizza to transfer into a shape that remained round on the stone although the family thinks that I made a fair replica of Africa. I am recovering from a nasty burn, that accompanied "prepare your oven for hearth baking." So I was a little more cautious with my dough transfer. Pizza number four folded on itself, spilling some of it's sauce and cheese onto the pizza stone. When I opened the oven to put in the fifth pizza I finally did it, I set off the fire alarm. The dog could not decide if she should be begging for pizza or howling with the alarm. The good news is, the firemen did not show up, we did not have to share our pizza.

I have made doughs that were easier to handle, but this was delicious. The main stakeholder has quite a flair at pizza design.
Posted by Rosemary & Garlic at 5:05 PM