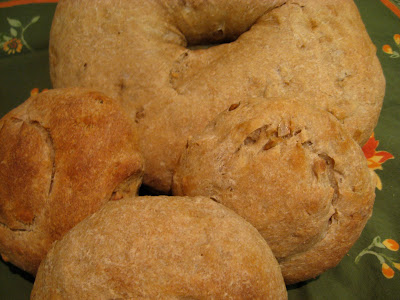 The last of the sourdough breads. It has been interesting journey, some delights, one 100% inedible.

The day before I made the bread, I soaked some whole rye in water. The next day, I added some starter to bread flour, salt, yeast and toasted sunflower seeds. with enough water to make a tacky but not sticky dough. I work hard to not overmix the rye, to avoid the gumminess that can happen.

The dough doubled in 90 minutes and was shaped into one couronne, which was similar to a huge bagel. I put the dowel marks on the bread, but I was not aggressive enough and they disappeared during the final rise. Half of the dough I formed into tiny boule for dinner.

Again, I prepared my oven for hearth baking and cooked the bread.

This was not my favorite of the sourdoughs. It was a very hearty loaf. Maybe even a little too hearty.
Posted by Rosemary & Garlic at 2:52 PM