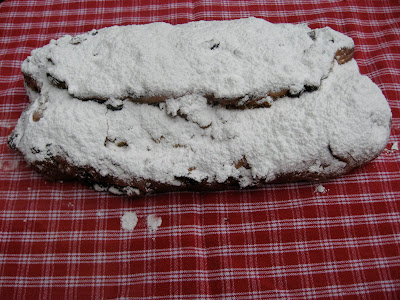 Being involved with the Bread Baker's Aprentice challenge, I find that I always have bread on my mind. I am aware of where the regulars are with the challenge with their bread. I know what is coming up, because I am about two or three breads behind from the most regular baker.

I had brought a loaf of bread to work and was thinking about the Stollen. By now, everyone who reads my blog is aware that the people of my house do not like fruits in their breads. Me, not so picky, I like cranberries and pears, maybe the occasional apricot. But whatever I make that has fruit, I have to be prepared to eat the entire loaf.

I was pretty sure that I couldn't eat an entire stollen. The question was what should I do with it? About the time this was weighing heavy on my mind, one of my student's parent walked in. She is German, and can pronounce and enjoy Stollen. She was willing to assess mine. Indeed, she said that she works with a lot of women who are German and they would try it,

Maybe this was more than I bargained for. What are the odds that whatever I make compares with their childhood Christmas memories? Not very likely. When I was researching the stollen, trying to figure out how to fold it, it became apparent that there are a number of variations on the recipe. Unlike Peter Reinhart, who mistakenly told a roomful of chefs from different nations that all their holiday breads were very similar, I doubt that I will be making anyone's childhood favorite. The nuances of our memories are very strong.

I have noticed that if you grew up eating a specific bread, like bagels, challah or portugese sweet breads, frequently you have a little different flavor profile in mind for the bread. So will the women like this bread?

I started by soaking the dried fruit in brandy for about three days. The fruit were nice and puffed and full of liquid.

This morning, I made the starter by mixing yeast, flour and milk and letting sit on the counter until bubbly. I assembled my ingredients, the dry, flour, salt, cinnamon (which is not in all the recipes), the wet, eggs, butter and the soaker and the fruit. 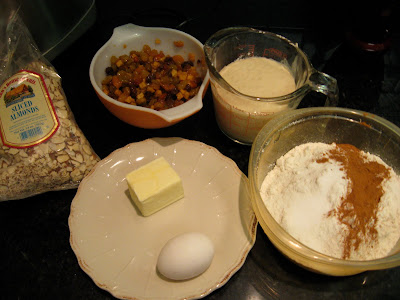 They were all put together to make a delightful dough. I had to add a little more flour after I put the wet fruit into the mix. 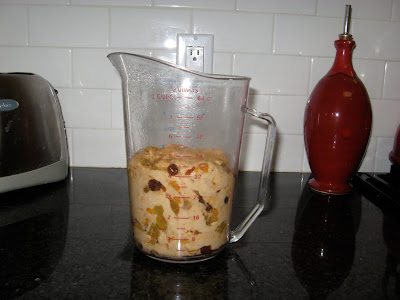 The dough doubled and was then folded into a swaddling baby shape. It can also be formed into a crescent. How it is really done, eludes me. I have read a few blogs, puzzled about the used of a broomstick, and come up with a plan. A number of recipes add marzipan in the fold. I added slivered almonds. When the loaf came out of the oven, I brushed them with melted butter. I know that Peter says oil, but I prefer the flavor of butter. Sprinkled with confectioners sugar, they cooled and were wrapped off and sent off for their evaluation.

I delivered them in the morning and before noon I had received the verdict; delicious!
Posted by Rosemary & Garlic at 7:06 AM