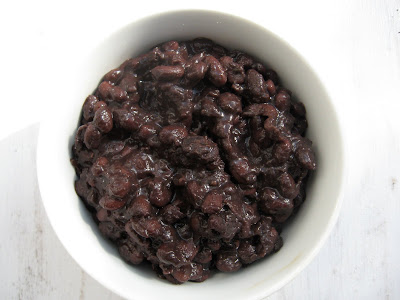 I like a good side of black beans. I have perhaps too many Southwestern and vegetarian cookbooks. I have tried a lot of recipes and have a new favorite. They are from The Santa Fe School of Cooking Cookbook by Susan Curtis. Apparently the recipe was developed by Todd Sanson as part of the Southwest Vegetarian class. I've made a few changes.

I don't soak my beans, Cooks Illustrated did a test on soaking, not soaking and it doesn't seem to make that much of a difference. Works for me, I don't necessarily know the night before what I am eating the next day. So start by picking over a pound of black beans. My main stakeholder helped me out here, he was flipped out to learn that there were rocks in black beans. He probably pulled out eight. I imagine, he could easily picture cracked teeth.

The original recipe had epazote, which is a Mexican herb with a strong odor, sometimes described as gasoliney. It is hard to find, I omitted it. It also had Amontillado Sherry, which I also omitted. Chipotle chiles are smoked red jalepenos. The flavor is amazing in these beans. After the chiles had rehydrated by simmering in the water, I slit them open so some of their spice would be sure to get into the beans.

Heat the oil in at least a 4 quart pot, saute the onion for three mins, add the garlic, saute for 2 minutes. Add the bay leaves, oregano, and chiles, saute for 1 minute. Add the beans and 3 quarts of water. Bring to a boil, reduce heat to simmer uncovered for 2 to 3 hours, until the beans are soft. You may need to add more water, depending on how fast your simmer is.

Add the vinegar and salt and cook slowly for 30 more minutes. Taste and adjust seasonings.
Posted by Rosemary & Garlic at 5:55 AM