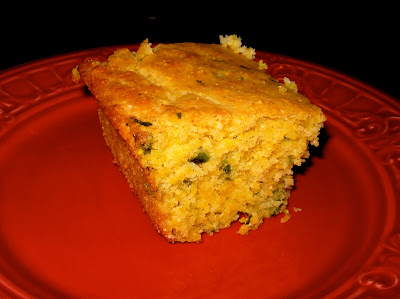 I wanted some cornbread for tonight's dinner and when I checked in the Modern Baker, by Nick Malgieri, I found a recipe. A quick peek at the Modern Bakers Challenge web paged indicated that no one had signed up to blog about the recipe. I don't know why people aren't rushing to sign up for the bread that calls for four jalapenos. I'm not kidding. Four.

This is a savory recipe in his quick breads section. The quick breads come together with little effort. It is a little bit of an unusual cornbread with the addition of jalapenos, scallions and cilantro. You actually have to seed, and slice some jalapenos and scallions and saute them. I chose to use only two jalapenos, and I diced them. Sometimes I like cornbread for breakfast, and didn't want to end up with a slice of jalepeno in my mouth at five in the morning.

I assembled my ingredients and set about measuring and chopping. 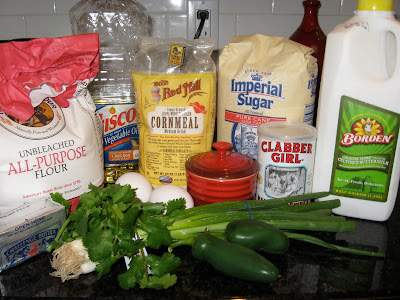 Once the jalapenos and scallions cooled, and butter was melted and cooled this recipe came together quickly. 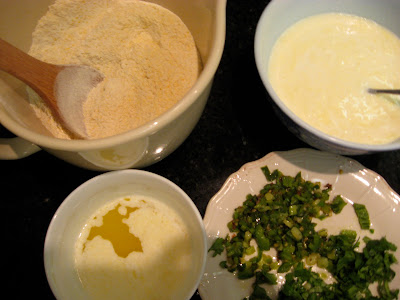 cornmeal, ap flour, sugar, baking powder, and salt were combined. The eggs were beaten lightly and buttermilk was added to the eggs. Several options are provided for the liquid, I feel buttermilk adds a nice tang to cornbread.

The melted butter and the cooled jalapenos, scallions and cilantro were added to the liquid and everything was combined. 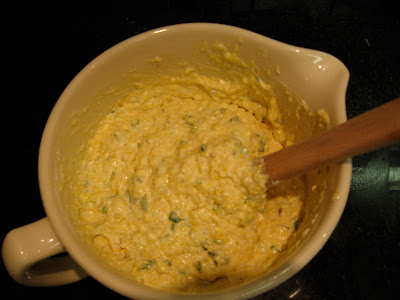 I put it into a square pan. Nick uses round, but I like squares of cornbread. They are easier to split open and grill in the morning. 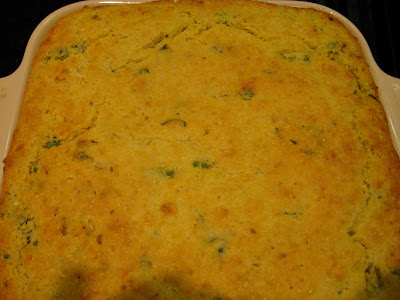 This is a delightful savory cornbread recipe. I liked the flavor from the 2 jalapenos and the baked cilantro. However, it is not a sweet cornbread. I was impressed by how varied the reviews of the cornbread recipe in the Bread Bakers Apprentice challenge were, I wonder if this recipe will invoke the same varied response.
Posted by Rosemary & Garlic at 9:18 AM