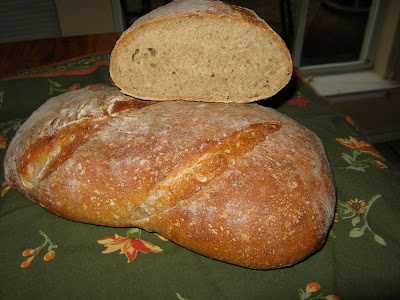 I have officially baked my first bread in the Mellow Bakers challenge. The rustic bread started with a pre-ferment. A pre-ferment adds a depth of flavor to breads. This rustic bread pre-ferment used bread flour, water, salt and yeast. A stiff dough was formed that was allowed to stand on the counter for 12 - 16 hours.

The next day bread flour, whole rye flour, whole wheat flour, water, salt, and yeast were combined with the preferment. I cut back on the amount of salt in the recipe. One Tablespoon of salt is a little too much salt for my taste. 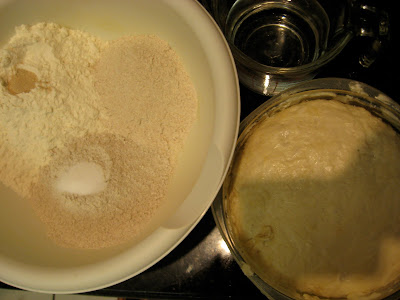 Knowing how rye flour can quickly get gummy, I paid close attention to the dough during mixing. It took less than 5 minutes for it to come together and form a supple dough.

The dough was then fermented for 2.5 hours with folding at the 50 minute and 100 minute mark.

After resting, I tried Hamelman's folding technique. I was trying to make a batard with blunt ends. I didn't quite pull it off. The loaves had their final fermentation in floured baker's linens. 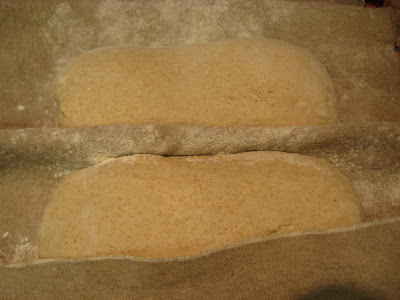 I checked on them after 25 minutes and was surprised at how brown they were. Clearly I should have scored them more deeply.

It makes a very tasty loaf of bread, I think that the three flours come together in a delicious fashion and am looking forward to toast...
Posted by Rosemary & Garlic at 11:30 AM