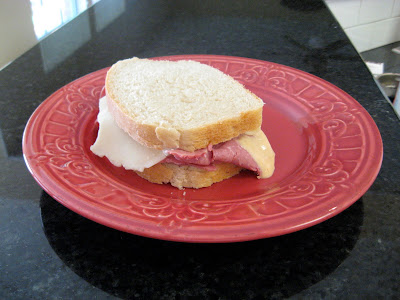 My starters are all happy on my counter. The BBA starter just took a little extra time to reach a point where I would be willing to try it in a recipe. Once it was doubling and bubbling I decided to try it in the New York Deli Rye. An unusual bread. You add the barm, which seems a lot like starter to me, to some white rye flour, water, cooked cooled diced onions and oil and make a starter that you leave out for four hours and then refrigerate.

The next day, I took the starter out of the refrigerator and left it on the counter for an hour. Then I added high gluten flour, white rye flour, brown sugar, salt, yeast, shortening, buttermilk and water to form a soft mass. This was let to sit for 5 mins to let the gluten develop. Which by the way, I can't see, can't tell, just hope I am doing it correctly. The I used my mixer for four mins to make a firm, tacky dough. It took two hours for it to double.

A few years ago, I got some large calphalon bread pans at a discount store. Too large for your average recipe, they have come in handy with the BBA challenge. I divided this into two and made two beautiful loafs.

However, I think if I blind folded you and gave you a taste, you wouldn't guess rye bread. Tasty bread, but not what I would say was rye bread. I am waiting to see what everyone else thinks.
Posted by Rosemary & Garlic at 6:17 AM