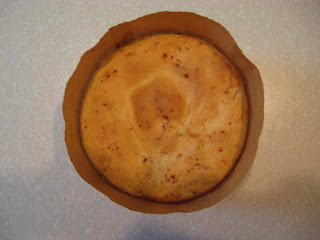 I was worried that Casatiello would be a challenge. We were going to meet my in laws in a rented cottage in Lewes, DE. You never know what you will find in a rental's kitchen or the local grocery store. I put a little yeast in a container, packed up some spices and a copy of the recipe and flew into Philadelphia.

We made a trip into the city for some supplies. When I was single, I lived a few streets over from the Italian Market. The neighborhood looks great, cute coffee shops and bistros. It was fun to see.

The Philadelphia Italian market remains wonderful. I stopped by Claudio's on South 9th street for some cheese and salami. I miss Claudio's. They let you taste. The cheese is amazing. I told Sal, the pleasant man behind the counter, what I was making, and he suggested what salami to use.

I was still concerned about the container so I stopped by Fante's.
Anything you need for baking, you could find there. I picked up some paper Panettone molds. I mentioned to my daughter that I was going to fold one up and stick it in my suitcase for later. The sales lady overheard and was appalled. She suggested just carrying on the plane so as not to crush it. Me, my papermold, the joys of going through security, it wasn't going to happen.

My oldest son flew into Phili on Tuesday to spend some time with us. I had planned on getting him to knead for the recommended 12 minutes, big hands, strong man, it would work. I didn't think that there would be a stand mixer waiting for me and I was right. However, when my husband left to pick him up from the airport, I was so anxious I decided to start working on the bread, give me something to do.

My sons go to college 1500 miles away from me. Although I am proud that we have raised young adults who are comfortable going off on their own, I miss them. School, sports and their jobs keep them away. Periodically, I need to hug them, smell them and watch them eat. Waiting for them to come home drives me crazy.

The bread was easy, it was a bit messy at first but responded well to the kneading. While the bread was baking, the cottage smelled like an Italian bakery. It was cooling when they pulled up from the airport. Perfect timing.
Posted by Rosemary & Garlic at 7:01 AM