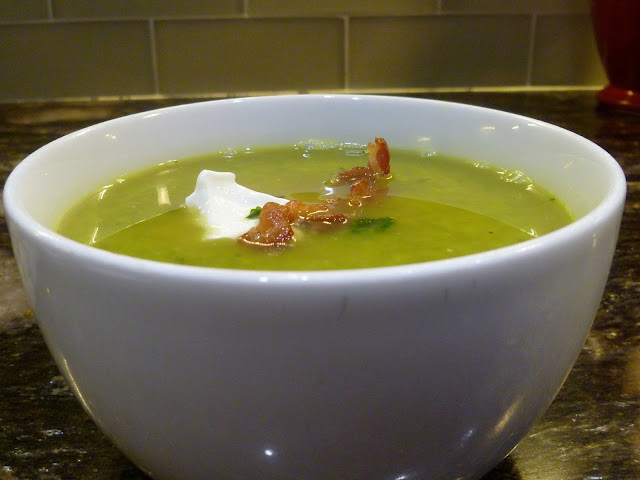 This French Friday's with Dorie was a very easy soup to make, and that had me a little worried.  Generally, I enjoy a soup that takes some time to come together.

I started off by sauteing some bacon for the garnish.  Then, because it was there,  I sauteed onion in the bacon fat.  I added chicken broth and frozen peas.  I added romaine lettuce that I had chopped in order to avoid any immersion blender issues.  I should say right now that I really enjoy my immersion blender, hard working, fast and easy to clean.  When I read in P&Q section for the recipe that the lettuce was causing issues frankly I was surprised because usually lettuce is so well behaved.  But to assure that everyone continued to work well together, I veered away from sliced lettuce toward chopped lettuce.  Everything simmered happily away. 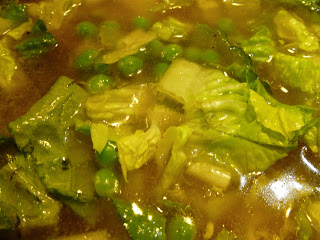 Then I pureed it, seasoned it with S&P and served it.  So I should have payed more attention to the P&Q section and used less liquid.  This was a bright green soup, I think that the color is dependent on the influence of the the broth.  I kept on thinking about Wicked, the musical.  My soup could have been used for the Green Elixir.

My husband liked it.  It is fun to come in from the freezing cold to a nice, bright, bowl of soup.  I thought that it was too thin and will use less broth next time.
Posted by Rosemary & Garlic at 4:24 AM