Oatmeal bread with Cinnamon, without Raisins 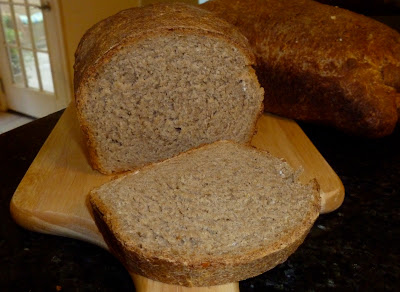 I haven't been baking or blogging much lately.  I have too many balls up in the air, and the heaviest is grad school.  What does it say when you would rather bake bread than work on your papers?  Anyway, people were excited when I pulled out my scale last night.

There are several delicious loaves for August's Mellow Baker's Challenge.  There are two Oatmeal Breads, one with cinnamon and raisins, one without.  I opted to make the cinnamon version but without the raisins since no one in my house likes their raisins cooked.

It is an easy loaf.  Oatmeal is soaked in water and then high gluten flour, whole wheat flour, milk, honey, vegetable oil, salt, yeast and cinnamon are added.  The dough fermented over night, was shaped and baked.  Joe came down when the morning house was filled with aromas and the bread was still in the oven and wanted to know how long it had to cool.

I love breads with oats.  I can't wait to try the non cinnamon version but this one is a keeper..
Posted by Rosemary & Garlic at 9:17 AM