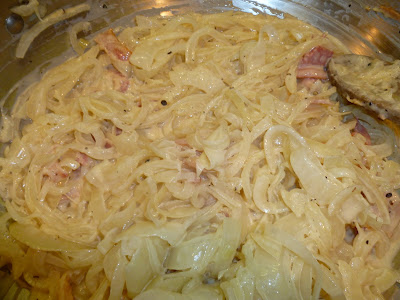 We have an agreement in my house. We will all tighten our belts and avoid frivolous spending in an attempt to recover from our trip to Europe. Everyone thinks it would be a wise fiscal move. We appeared to all be in agreement.

Unfortunately, I have an addiction to cookbooks. Generally, I can ignore them. I looked at a few cookbooks in a book store in Paris. Totally in French, using that wonderful metric system that I am trying to convince the United States to follow. And I was able to walk away. Pretty easily actually, since apparently although I can recall word for word some of my high school French lessons (Michelle and Anne watching TV instead of studying) I appear to have forgotten all the useful words. I am certain that I never knew the common recipe words.

There are a few things that I tried in Paris that I would like to replicate at home. We had some wonderful mussels. Actually, any time they were on a menu, I ordered them. There were some that had been broiled in cream and perhaps leeks. They are on my to do list.

I had a tart from the Salon de The that I must learn how to make. 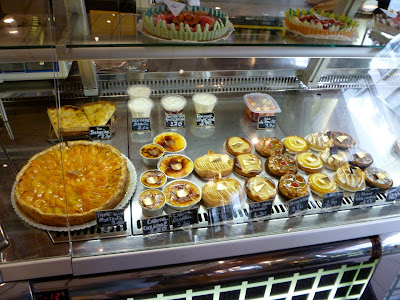 Visions of recipes were swirling in my head. And then when we returned, I learned that Dorie Greenspan's new book around my french table was available at Amazon.com I get Dorie's newsletter so I know that I like the way that she writes. I was tempted.

I have seen the baked goods that the bloggers who are in Tuesdays with Dorie bake. They are consistently some of the most delicious looking sweets from Baking from My Home to Yours by Dorie Greenspan and if I was a baker, I'd be in the group. But my house is almost devoid of sweet teeth.

I remained tempted. I looked at Amazon.com's page. Someone had reviewed it and had made a quiche, I have recipes for quiches, delicious recipes, I could withstand the temptation. But I bought 4" tart pans with removal bottoms instead...

Then, Gaarp at Of Cabbages & King Cakes wrote about Dorie's recipe for eggplant caviar. Who can resist eggplant? I just planted some lovely plants for our fall garden. What if I have no recipes when they are ready for harvest? So I bought the book, I caved, completely. To Gaarp's peer pressure.

What a wonderful read. Far better than the material for my master's of nursing... I could spend the day reading the cookbook.

I decided to try the recipe swap onion "carbonara." In my house, creamed onions are the sought after Thanksgiving side. These looked delicious. With onions, bacon, cream, egg, butter and Parmesan how could you go wrong?

It is an easy recipe, that started with thinly sliced steamed onions. I have never steamed onions. Mixed with the bacon and the carbonara sauce they were delightful. I am so excited. It is a beautiful book, tempting recipes, I guess it isn't the worst addiction.
Posted by Rosemary & Garlic at 3:33 PM