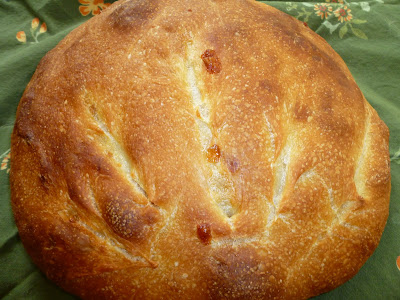 Well, October's bread selections are up for The Mellow Baker's Challenge. I was hoping to end up with Normandy Apple Bread, it seems like a fall bread. Jeffrey Hamelman's Bread has so many intriguing recipes. And sooner or later, the Mellow Baker's will reach all of them.

October's breads will include pretzels, roasted potato bread and challah. If you bake bread a lot, you have favorite recipes. I really like the Bread Baker's Apprentice potato rosemary bread, we will have to see how Hamelman's recipe compares. The man can bake. I see challah and I think french toast. I am looking forward to baking that. I like braiding.

The cheese bread was an interesting recipe. It stated with a stiff-levain build that stayed in the refrigerator for twelve hours. Then flour, water, olive oil, salt, and yeast were added to the levain. The cheese, which I grated, was added and the dough was fermented for 2.5 hours.

It was shaped, fermented again and baked.

I had a pretty slack dough. I wanted to slash it like Ostwestwind's loaf, who had one of the nicest looking loaves, but it was too slack.

The good news is, it was delicious. 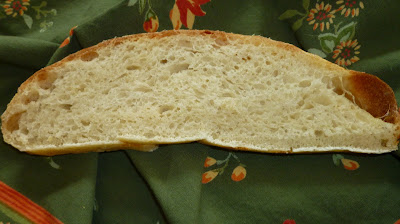