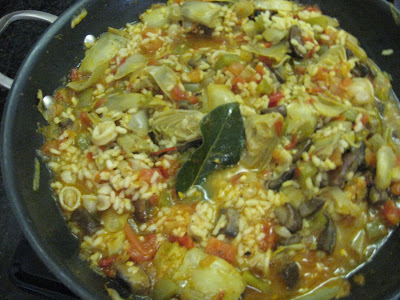 I signed up for the Daring Cooks Challenge. Several of the blogs that I watch are Daring Bakers. I'm not a big fan of pushing myself to new baking extremes. Baking a cake can drives me insane. Starting with folding in egg whites, really, do you fold? Like a towel? Too much and you don't get the lift, too little and your cake will rise funny. Then, cutting off the top of the cake so it is nice and flat seems so wasteful. Anyway, I like to cook more than I like to bake. So I joined.

There are all kinds of secretive rules surrounding the challenge, the web site, The Daring Kitchen, lists all the rules. But on the 14th of each month, we can all post our blogs about the challenge.

I have to type up the cooking experience before the 14th however, I would forget half of the details. This month's challenge was hosted by Olga from Las Cosas de Olga It is rice with mushrooms, artichokes and cuttlefish. Olga's blog has some beautiful pictures and is written in Spanish. It was great fun to make something clearly different from my usual fare.

However some of the ingredients were a little challenging to find here in the middle of Texas. Like cuttlefish, cuttlefish is in the same family as squid so I substituted squid. The recipe called for two cuttlefish, I wish there had been a size or weight associated with the ingredient. I added more squid than two since mine were small, but could easily have added even more. Artichokes were $3.99 a piece at my local grocery store, so I substituted frozen, already cleaned, I thought they were a bargain.

The dish involves a sofregit, cooked down onions, tomatoes, garlic, peppers. Which is added to the short rice and fish stock. I made that first and it filled the house with the arouma. The dish is finished with an aioli and Olga lists two ways to make it, the traditional method with only a mortar and pestle and the modern method with a mixer. Next time I will try modern. The 20 minutes of hand grinding was a little much for me. 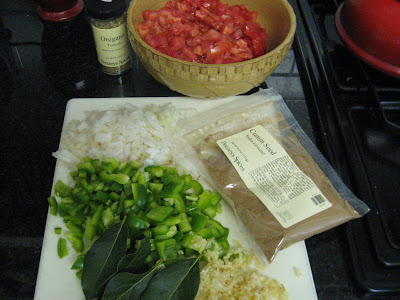 We enjoyed the dish, we felt like we had a little piece of Spain in our kitchen.
Posted by Rosemary & Garlic at 5:19 PM