Everything in the freeze must go! Duck Confit

The packers are coming in two days.  We sold our house much sooner than expected.  We have frantically been trying to eat our way through the freezer, we have done a pretty good job.  However, I still had two duck legs and some duck fat waiting for me.  I don't really know that many people who would appreciate my duck fat... So I decided to make some duck confit.

I went outside and got some herbs, bay right outside the door. 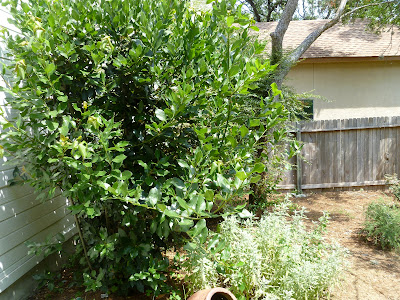 And some salt, some brown sugar, pepper and rubbed the legs, wrapped them and put them in the refrigerator. 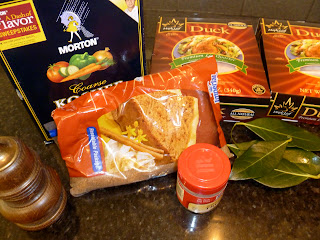 Today, I cooked the duck in the fat at 190 for seven hours.  When the meat was tender, I let it cool.  Tomorrow, I will pan fry them in some of the duck fat till crispy.  And then, this is the very sad part, I will throw the duck fat out. 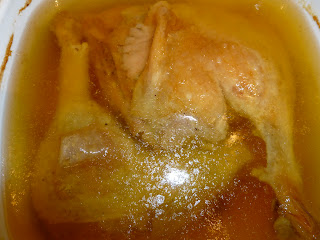 We had a few people over to say good bye.  I offered condiments, anyone interested in anything in my refrigerator.  Really, I must have at least four types of mustards, anchovies, thai pastes, raspberry preserves, loganberry jam.  I have some really good stuff.  No one took anything.

We keep track of the states that we have visited.  I have a beautiful state map and we outline all of the visited states in brown.  The ones that have left the nest try to get more states than us. 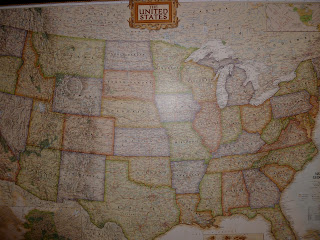 When we leave in a few weeks, we plan on driving from San Antonio to Oklahoma City, a long day but it is better to get out of Texas.  Make a clean break.  I am sadder than I ever have been with this move than any other moves.  We have been here so long that I have deep roots.  We must flee the state or Emily and I will grab the controls and make Tom turn around.

We have been to Oklahoma City.  This time we will be traveling with our Labrador.  She thinks that a car trip ends in camping.  This should be interesting, this car trip will end in hotels.   The next day, we will head to St. Louis MO, a new state, with a brief stop in Pittsburg Kansas, because we can.  Then, on to Chicago.  In the morning, we will head in the wrong direction to Racine Wisconsin for breakfast (getting another state!).  Turn around and head to Michigan and family and then onward to PA.

Will we own the house?  Who knows, it is a slow process at best.  Our lending company has lost every paper that we faxed to them, which is a little disconcerting.  I have high hopes.
Posted by Rosemary & Garlic at 7:48 PM