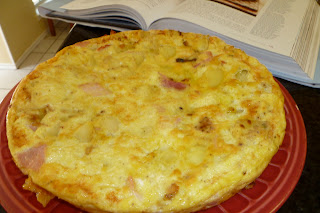 There is a suggestion at French Fridays with Dorie for a delicious Valentine's Day dinner.  The potato tortilla, served at warm temperature, is suggested as an appetizer.

Tortilla means something completely different in the Basque region of France than it does in Texas.  This is more like a room temperature omelet than anything that would be considered a tortilla in my neck of the woods. 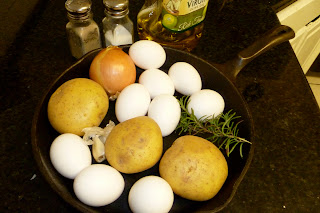 You start by cooking some cubed Yukon Golds and diced onion in a cast iron pan.  Some rosemary,  garlic with the skin left on and salt and pepper are added to the potatoes and onions.  It is sauteed for about twenty minutes.  After the potatoes are tender, they are removed and the pan is wiped down.  The garlic and rosemary are removed, I had to hunt around for the garlic skins.

9 large eggs that have been beaten with salt and pepper and a pinch of cayenne are mixed with the potatoes and onions.  The mixture is returned to the oil coated skilled, cooked slowly and then put under the broiler for final browning. 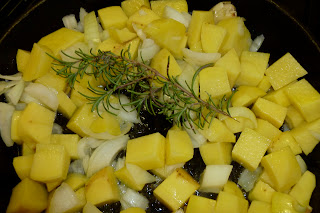 We ate the tortilla warm.  My husband and daughter enjoyed it.
Posted by Rosemary & Garlic at 6:17 AM