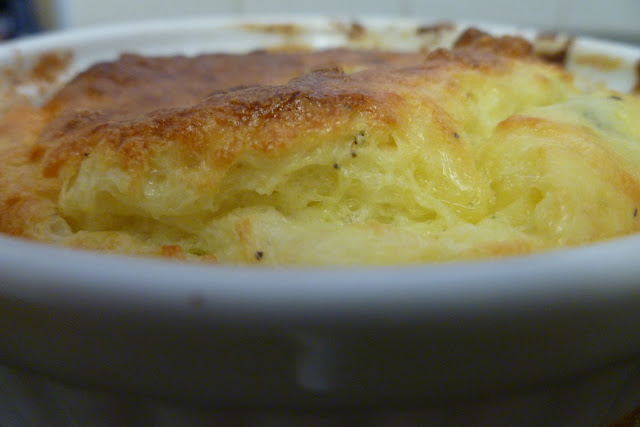 Linda and Dave of Monkeyshines in the Kitchen chose November's Daring Cooks Challenge .  We were to make a souffle.  Sweet, savory, it didn't matter.

Years ago, I went through a souffle stage.   At the end of it,  I concluded that I don't really like souffles.  I generally don't like really eggy dishes.  Flan, quiche, meringue not really my favorites.

However, a souffle is a wonderful canvas, lots of ingredients can be incorporated into them.  I wanted to make mine from things that I had on hand. 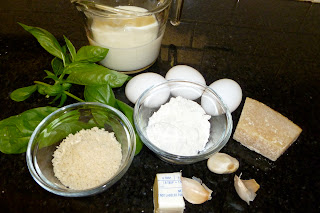 The basil in my backyard is thriving.  We have towering tomato bushes filled with green tomatoes.  The race is on to see if winter's first frost arrives in Texas before red tomatoes...

At some point, I gave away my ceramic souffle dish.  Every so often I go through a decluttering kick.  So I found myself without the perfect pan.  I decided to make four individual ramekins from a three egg souffle for lunch.

I sauteed some garlic in some butter.  I added some flour, cooked it for a bit.  Added milk and made a thick bechamel sauce.  I seasoned it with salt and pepper.  I let it cool for ten minutes.  I added the egg yolks one by one followed by the cheese and basil.

The egg white were beaten and then folded in.  Folding always confuses me.  Too much folding and the wonderful bubbles disappear.  Too little folding and you have large streaks of cooked egg whites.  A delicate balance is needed. 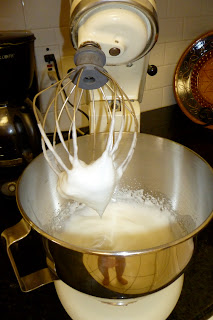 I divided the mixture into four ramekins and put them into the oven, with a burnt out lightbulb.  And hoped that the tops weren't burning.   Because you can't open the oven to check on them.  Because they are souffles... 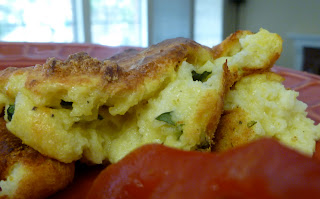 I served it with some sliced tomatoes.  A delicious lunch, the two souffles left on the counter quickly shriveled away.  Because they are souffles.  Beautiful for a moment only.
Posted by Rosemary & Garlic at 5:12 AM